My bus arrived at the town of Nazca at about 8 pm. Since Nazca is located in the desert, there was already a cool wind blowing. I waited for the arranged airport transfer to the hotel near the airstrip, but no one showed up. One by one, all the passengers departed. Ten minutes passed. It was getting colder. A solution wasn’t getting any closer.

A short man who had been watching from the shadows of the terminal, offered to take me to an affordable hotel. With not another soul in sight, I decided to take him up on the offer. We went out of the station and after a few minutes an old beat-up ’70s station wagon showed up. My new amigo stuck his hand out and hailed the ”TAXI”. I hesitantly pointed out the obvious that there was no TAXI sign on it. He educated me that this was their taxi service. Simple. You hailed a private car, any car that passed by. Then you negotiated a rate to your destination. And, ole, you had private public transport.

Fare negotiated, I put my bag in what was euphemistically the back seat and got in. Barring the section on which I sat, there was no padding on the rest of the seat. Just the exposed wire mesh, coil and springs on which my bag lay. As we started driving off, I heard a low, incessant whooshing and flapping sound. For a while I thought it was the wind blowing in through the window. But when I glanced out I realized that this acoustical harmony came to us courtesy of sheets of paper stuck to the top of the windows with tape, to create makeshift windowpanes.

After 10 minutes of this desert symphony, we arrived at Hotel Sol (Sun). It had 2 stars next to it. Not sure whether it was the hotel rating, or a trick signboard with stars used as design elements, I hesitantly stepped in. To my surprise I got a clean room with an en suite bathroom for just US$10. 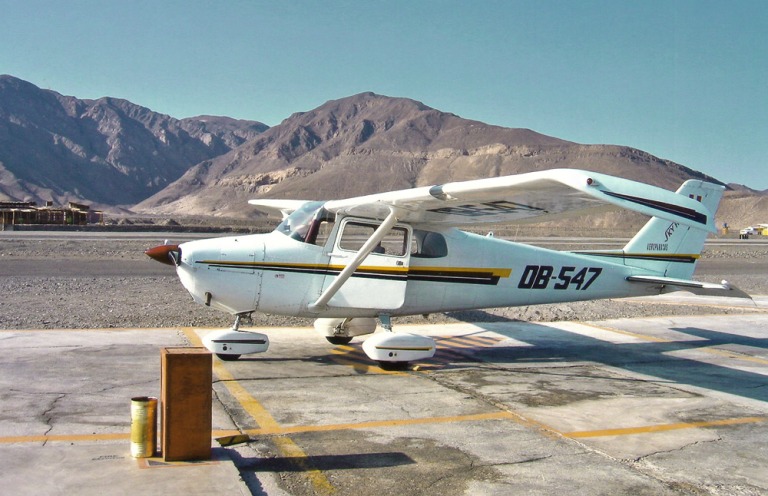 After a good night’s sleep I headed to the airport. Soon I was up in a single-propeller plane. The planes aren’t very stable but they can fly at a low altitude. This makes them perfect to observe the Art of the Nazca.

As the plane kisses the clouds, you feel like a God. Below, the arid land transforms into a giant art gallery. The dry desert is the canvas. On it, are sketched numerous creatures like a Whale, Spider, Monkey and a Hummingbird. The sketches itself are extremely stylized and would be considered cool by the artsy-fartsy even today.

There were no colours or paintbrushes used to create these giant masterpieces. Surface stones were removed about 2,000 years back by the Nazca and piled beside the lighter soil below. Unlike other masterpieces on wood or canvas, these works of art have had no wear and tear for millennia because of a lack of rain and wind.

Over the years, various theories have sought to explain these puzzling yet masterful drawings. The outlandish theories attributed them to aliens and maintained that these were landing strips for UFOs. But the most plausible explanation is that the sketches corresponded to constellations and were part of an astronomical calendar of the Nazca people. They were signals to God to ask for rain and other boons for the parched people below.

As you descend from the plane you can’t help but feel insignificant in this vast expanse of desert. It is remarkable then that the people of an ancient culture with no modern implements could create work that could be seen from the skies.

Having played heavenly art critic, it was time for a good siesta to make up for the early morning start. I had extended the room for half a day, because around midnight I started my 12-hour journey to Cuzco: The launch pad for the trip to Machu Picchu.