You know a trip is going to be great when the adventure begins before you take off. I arrived at the airport’s check-in counter. It had seen better days. So had the old weighing machine. It looked like the tall machines at ancient train stations, on which eager kids and dads clambered up and waited with bated breath till they discovered their weight.

I was asked to put my bag on it. Then to my surprise, I was asked to get onto the weighing machine. When I asked incredulously if the counter attendant actually meant I should get on, he patiently explained that it’s a small plane. And there’s only so much weight it can carry. If the total weight of pilot, the handful of passengers and bags exceeds the limit, well, something or someone would have to be taken off.

Luckily my bag was as malnourished as me and we made it on board. Soon after take-off I looked out of the window and saw what looked like endless fields of giant broccoli all the way to the horizon. Since the plane flew low enough, a closer look revealed that they were tops of trees. After flying over the trees for about 45 minutes, the pilot started his descent. A few minutes later, I could see a clearing cut into the jungle. It would have to be our airstrip. Though I couldn’t see any concrete runway. Clearly, the pilot would be landing on the grass.

It was a bumpy touchdown and a nerve-wracking few moments as the plane rushed towards the trees ahead like a winged angel on a suicide mission. I prayed to God the pilot had remembered to top up the brake fluid. Finally, we came to a halt. The trees were still thankfully a little distance away. The door opened, a little ladder was placed under it and soon we were finally in the heart of the Amazon jungle.

We passed by a little thatched roof hut that was open on all 4 sides. Wooden stumps and planks made for makeshift shelves. On it, I saw various objects of tribal art carved out of wood. This, I smiled to myself, must be their Arrival and Departure Hall with its Duty-Free shop. To my lasting regret I didn’t buy any of them as I was in a hurry to get going.

There was a wooden building ahead. When asked what was its purpose, I was told that it was for pilots and travellers who had to stay a night or two when heavy fog prevented the plane from taking off. I had been warned.

We clambered aboard motorboats and then we were off on a 2- hour journey down the river. In South America, almost everything seems larger than life. Even names. The river we were on was called Madre de Dios. For Anglophiles, ”Mother of God.”

Gnarled branches and tree trunks swept past in the rapid currents. The odd forest settlement came into view every now and then. Colourful birds escorted us in an aerial relay, as parrots and eagles and macaws joined us for a part of our journey.

Finally we arrived at the Manu Wildlife Center Lodge in the jungle. A toucan kept watch from a tree as we trooped in. (The Lodge is partly owned by renowned ornithologist Barry Walker.) My shelter for the next few days was a hut built out of wood and thatch. It was basic, yet clean and comfortable with adequate water and bathroom facilities. Naturally, there was no electricity. But the Lodge had helpfully provided 2 candles and a matchbox in the hut. Blankets are surplus to requirements in the oppressive jungle heat. So instead, my bed had been thoughtfully furnished with a hanging mosquito net that enveloped me as I slept. At night, it was worth worth more than any of the fabled Inca gold in the jungle.

Days in the jungle start at sunrise and end soon after sunset. After all, you can’t read more than a couple of pages in candlelight. And so the next morning, we were up and on our way before sunrise. We took a short boat ride and then started our trek to a ”clay-lick” where Macaws congregate.

As I walked, I realized there is a major difference between watching the jungle on TV and actually being there. The jungle is a living, breathing entity that holds thousands of lives. In this diorama, there are innumerable lives that you can watch. The idiot box can only show you 1 at a time. And so I noticed God’s many marvellous creatures taking a bow.

A legion of Leaf-Cutter Ants marched in military precision, while holding aloft a large part of a leaf, like an ancient army carrying away the spoils of a military conquest; a Dung Beetle assiduously rolling up dung into a ball as if it was preparing the morning dough to be baked into bread; a Brown Agouti (South American rodent that’s a larger relative of the guinea pig) scurrying away as it was doubtless disturbed on its morning stroll by those strange creatures wearing boots. 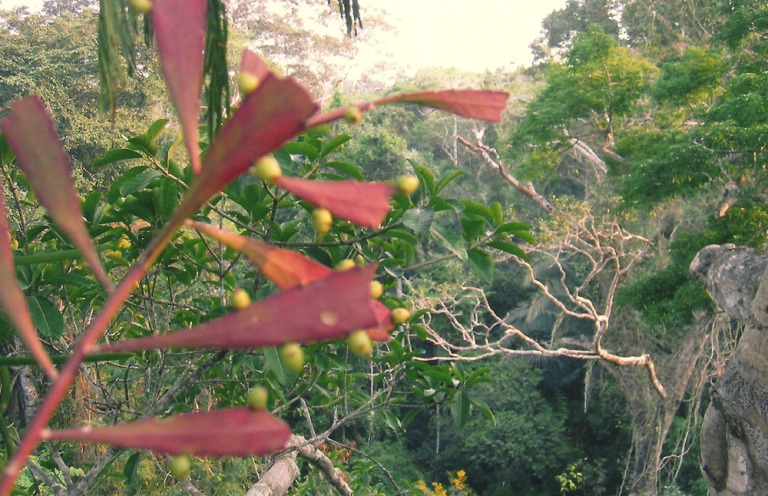 About 15 minutes later, we arrived at a wooden cabin. It was a Bird Observatory with 2-3 rectangular slits through which people can observe the side of a steep rocky face. In the cracks of the cliff were clay deposits. The clay aids in digestion of food and so the birds come there to eat it. This makes the spot a great place to observe nature in an ideal way. The birds are living normal lives, yet binocular-toting tourists can feast their eyes.

We waited with bated breath for the show to begin. First, an entire squadron of green parrots swept past like a giant magic carpet flying across the sky. Then the scarlet and blue macaws arrived. But before the entire flock could descend, the ones at the clay-lick began to emit high-pitched shrieks and flew away. Our guide pointed to a lone eagle circling overhead as the reason for the flight of the macaws. The eagles prey on macaws, which like to feed on the clay. And so in this dance of nature, the macaws retreated until the eagle realized that it couldn’t find any easy prey and flew away.

Once the macaws returned, the clay-lick was filled with a beautiful tapestry of colour. A delightful cacophony of sound filled the air. You feel blessed that you are here today to see this wonderful world that God has created. We returned back in time for a light lunch at the Lodge. (No meal options. Just 1 dish served to one and all in a delightful wooden hut.) 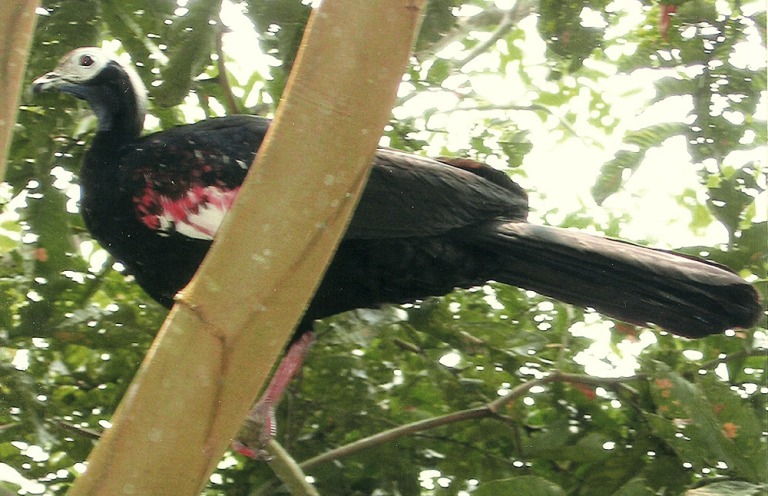 After siesta, we were off through the jungle on another trek with our guide, Waldo – a stocky Peruvian with enough beard to hide an extended family of insects. We saw numerous birds and monkeys whose names I no longer recall. The most enduring memories of that trek were 2 anecdotes.

The first anecdote came courtesy of a young English couple that had trekked through the jungle for 7 days to get to the lodge. Avid naturalists, they had stopped below a tree to admire a monkey on a branch. The monkey growled at them. No surprise. No one likes gawking strangers on our doorstep. But with the insouciant immunity that we humans cloak ourselves in, they thought it was all okay. What could a monkey do? Well, he started to pee on them. Nature’s ”Piss off.” I tried very hard to keep a straight face as they told us their tale.

The second story was from Waldo. A colourful butterfly had just flitted past. Someone remarked about how beautiful and harmless butterflies were. Waldo proceeded to recount a bizarre incident to the contrary. He had been in the hot, steamy Amazon for a few days and had hung out his shirt to dry. After he thought it had dried, he wore it.

Some time later he felt a throbbing pain inside his arm. The pain wasn’t in one spot but actually moved. His friend who was an experienced jungle native told him the reason. A butterfly (hold your breath) had probably landed on his damp shirt and laid eggs. After he’d worn it and started sweating again in the jungle, the miniscule eggs had gone through the shirt and under his skin. The pain he was feeling was when the eggs hatched and the larva of the butterfly started moving inside his arm.

Far away from any clinic or hospital, the way of dealing with this pain in the wild was to make a cut with a jungle knife in Waldo’s arm. Then, tobacco was wet and put inside the cut. The toxins from the tobacco killed the butterfly inside. When Waldo got out of the jungle and into town, they made a deeper incision and removed the dead young butterfly from inside his arm. True? I have Waldo’s word for it. Bizarre? Undoubtedly. I’ve always thought nothing can stop someone from smoking. But this story just might.

The next day we made a trek through the jungle. Waldo brought us to a river. He wanted to show us a family of otters that had made their home there. We got on board a raft that had been made out of logs of wood strapped together. A little engine had been fitted at the back and we gently glided along. But there were no otters in sight. Perhaps the family had moved on. 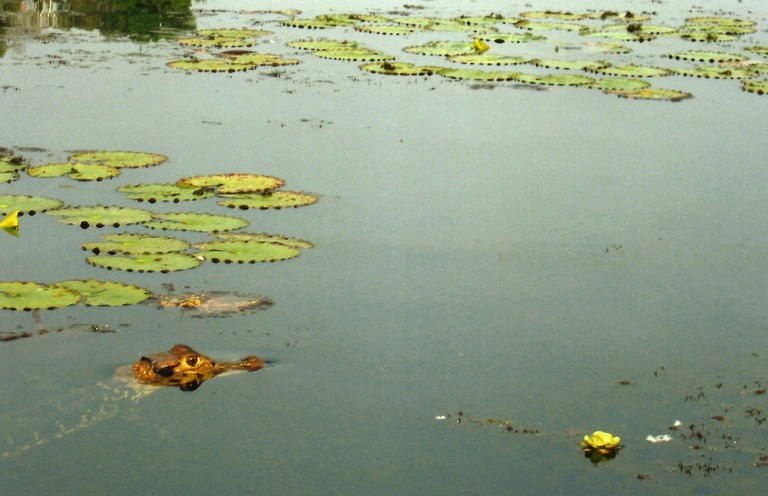 Suddenly Waldo pointed and said, ”Farrokh look to your left.” I did and saw nothing but murky green water. He persisted. ”45 degrees from you.” I still saw nothing but murky water. ”He’s looking at you,” Waldo whispered under his breath. Then, I finally saw the eye of a young Cayman looking at me. The colour of the eyes was exactly the same as the murky green water and was it not for a membranous lid briefly closing and re-opening over the eye, I would never have seen it. The Cayman was about 8 feet from the raft. Thank God for Piranhas. If I hadn’t been told there were Piranhas in the river, I may have fancied a dip in the Amazon.

That night I set off on a trek with just a couple of others and Waldo. Most people had taken the cue from sundown and decided to wind down themselves. But it was our last night in the jungle and I wasn’t going to miss the chance of a final rumble in the jungle. We walked for over an hour and finally we reached a tall observation tower made out of wood. We clambered up and waited patiently while an infrared light was trained on the clay-lick opposite. This place was a well-known spot for Tapirs to come and ease their digestive systems. After what must have been 30-45 minutes, a tapir cautiously emerged from the foliage and started feeding at the clay-lick. Thanks to the infrared light we could see him but he couldn’t see us. And so once again we were the human flies on the wall in God’s magnificent canvas.

The next day it was back down the Madre de Dios by boat. There was no fog. And so we were promptly whisked off in the twin-propeller plane. As I saw the ”Giant Broccoli Fields” stretch out in front of me, I had mixed feelings. Elated, that I had made it safely out of the jungle. Sad that I may never again do this in my life.